REIGN OF ALFONSO XIII: At that time the reign of Alfonso XIII was in force, which took place in 1902, after the fulfillment of the majority of age until 1931, once the Second Republic was proclaimed. During his reign, numerous problems took place, which caused the strongest crises of the restoration system.Regarding the politics of his reign, he had the Cánovas System, which highlights the turn of parties or bipartisanship where the conservative and liberal party was. On the other hand, the republican, nationalist and labor movements grew because of social discontent due to the crisis.At the same time, society and economy have signs of modernization, which was one of the objectives of Alfonso XIII at the beginning of his reign. FIRST WORLD WAR (1914-1918): This first international conflict was occasioned by the assassination of Archduke Franz Ferdinand, heir to the imperial throne of Austria-Hungary, with his wife the Duchess of Hohenberg in the city of Sarajevo,
Publicar un comentario
Leer más

SECOND REPUBLIC (1931-1936): After the preference of the Spanish citizens for the republic, Niceto Alcalá Zamora was named president of that republic, and Manuel Azaña was president of the government.During the first two years, there was a republican-socialist coalition government, which created a new constitution with reformist measures, to solve the problems of that time, but these measures fail.After new elections, the right side wins, forming a government with the radical party ,chaired by Gil Robles and the CEDA, which will stop the reforms which bringing out new discontents causing the 1934 revolution.After the coalition of the left parties; Republicans, socialists, communists and anarchists, won the elections and put back the reforms paralyzed by the right.This situation returned great social revolts between the left and right side, being given in 1936 a coup of Colonel Casado that will end in a Civil War.The Republic brought political and economic problems. There was a g
Publicar un comentario
Leer más

THE CIVIL WAR (1936-1939): On July 17, 1936, the military insurrection began in Melilla and extended to the peninsula and archipelagos. The peninsula was divided into two camps, the national zone and the republican zone. Franco requested air support to Germany and Italy (both in fascist dictatorships) thus creating the "airlift" that helped displace all the troops and move forward along the peninsula. They were advancing to Madrid where they met the "International Brigades" a corps of communist volunteers with tanks and Russian planes. In such a way that they stopped the conquest of the capital. Franco continued advancing close to the capital and managed to advance to the north, where the famous bombardment of Guernica carried out by the Condor Legion sent by Hitler took place. Bombardment of Guernica, Picasso´s paint. Finally, the nationalist offensive was carried out against Catalonia and after taking Barcelona, the troops entered Madrid on
Publicar un comentario
Leer más

THE FRANCOIST DICTATORSHIP (1939-1975): Ideological foundations of the regime: concentration of political power in Franco, anti-communism, traditionalism, militarism, anti-parliamentarism and anti-liberalism, fascist traits, national-patriotism, national-Catholicism, national-trade unionism ( Party-Single Union: FET de las JONS). The political evolution of the dictatorship is divided into several stages: And they approve the fundamental laws of the movement, a set of laws that synthesized the basic aspects of the Spanish political system (As a constitution does). The economic transformations that were carried out were: In 1939, Spain was a country ruined by war, are given ration cards and the "Estraperlo" (black market) became the only means to acquire necessary goods. The solution of the regime was Autarky (1939-1951): Economic policy based on the search for economic self-sufficiency and state intervention. In 1945 the INI was cr
Publicar un comentario
Leer más 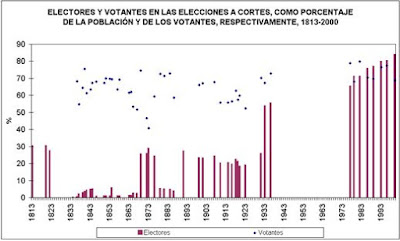 DEMOCRATIC SPAIN (1975-2008): THE TRANSITION (1975-1982): It is the period of restoration of the democratic institutions and encompasses since the proclamation of Juan Carlos I as king and head of state in 1975 until the electoral victory of the PSOE in 1982. Voters and electors in the elections to courts, as a percentage of the population and voters, respectively. Features: Controlled evolution, driven from within the system by the king and Suarez. Peaceful evolution consequence of the changes and maturity reached by the society in the years 70. Result of the consensus between some Francoist leaders and the opposition that suppressed the most radical aspects. Result of the ability of political personalities and the pressure of the masses desirous of substantial changes. It was favored by the international context. There was a first president, Arias Navarro, but he failed and the king named Adolfo Suárez as the new president. With it,
Publicar un comentario
Leer más

Evolution of public debt in Spain. Degree of commercial opening since 1850. The Spanish GDP in the last 150 years. Some links used to create this blog: Most of the work has been done with the notes of the secondary school. https://es.wikipedia.org/wiki/Primera_Guerra_Mundial http://www.historiasiglo20.org/HE/12a-1.htm http://www.iesfraypedro.com/files/sociales/alfonso-xiii-2b.pdf http://queaprendemoshoy.com/espana-ante-la-primera-guerra-mundial/ https://es.wikipedia.org/wiki/Espa%C3%B1a_en_la_Primera_Guerra_Mundial http://files.historia2nsbc.webnode.es/200000096-40232411d4/tema_13%20El%20franquismo.pdf http://alerce.pntic.mec.es/pong0000/23-primo.htm http://ccat.sas.upenn.edu/romance/spanish/219/11sigloxxespana/resumen.html https://www.vozpopuli.com/europa-_parque_tematico/economia-espanola-graficos_7_666903306.html http://www.lamoncloa.gob.es/presidente/presidentes/Paginas/index.aspx https://www.muyhistoria.es/co
Publicar un comentario
Leer más

Economic and political situation of Spain during the 20th century